Apparently, despite the richness in diversity and tremendous benefits to humanity rendered by the natural agro-biological wealth, there is rapid genetic erosion of many crops and varieties in Bhutan.

Therefore, as a part of the regular germplasm collection program of the Genebank, the National Biodiversity Centre in collaboration with Gewog Agriculture Sector of Lumang Gewog, Trashigang Dzongkhag conducted Crop Diversity Inventory on the 12th January 2023 and germplasm collection from 13th to 15th January 2023 at Lumang Gewog, Trashigang Dzongkhag.

The farmer participants were first introduced to the concept of biodiversity, and agro-biodiversity and then delve down onto crop biodiversity using the pictorial power point slides. Then the farmer participants were presented with various rationales on the importance of crop diversity using the pictorial power point slides. Farmers were also informed of the trend and various developments in the global arena when it comes to crop diversity.  Participants were also informed of the various efforts being put in place by the government in securing diversity in the gene bank and also maintain on-farm diversity.

Education and awareness were followed by inventorying of crops and varietal diversity being cultivated by the farmers of Lumang Gewog.

The Diversity Wheel analysis was also conducted with the germplasm samples brought by the farmers to assess the status of cultivation and the level of threat of extinction of varieties.

On-farm crop diversity Inventory revealed that the cultivation trend of 13 varieties was increasing, 71 stable, and 31 decreasing.

After enlisting the crop diversity being cultivated in Lumang Gewog, donor farmers/custodian farmers were identified for different crops for which the seeds are currently available. Based on gaps in the genebank collection a total of 18 germplasm samples were collected for the selected crops and crop varieties from those identified donor farmers/custodian farmers from Khaimanma, Tshogonpa, Bemri, Dungmanma, Kheshing, Dori, Lumang and Kurchhilo from 13th to 15th January 2023. These germplasm samples will be processed following the Genebank standards. 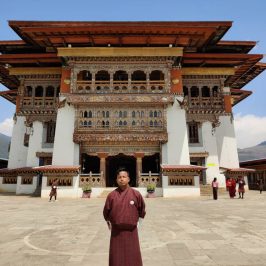